“Azovstal” defenders were released. In Russia, they were waiting to be brought to the tribunal 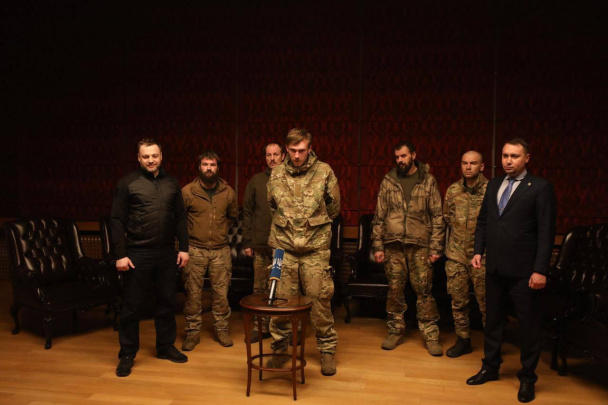 How do Z-patriots react to the fact that the Azov fighters, who are considered ardent Nazis, were replaced by Ukrainian Viktor Medvedchuk, a close friend of Putin?

On the evening of September 21, the largest and most likely the most important exchange of prisoners since the beginning of the war took place between Russia and Ukraine. According to the Ukrainian government, 215 people were returned from Russian captivity:

Ukraine returned to Russia 55 soldiers and “Putin’s son-in-law” Viktor Medvedchuk (Putin is the godfather of his eldest daughter). He was accused of treason by Kiev. According to Rybar Telegram channel, among the Russians returned from captivity are:

“Rybar” wrote that 32 more people should return to Russia.

About the return of about 200 servicemen to Ukraine, it was also announced on the air of a telethon in Ukraine: the head of the presidential office, Ondriy Yermak, reported to Volodymyr Zelensky, and then they communicated with those returned from captivity, including the commanders of “Azov” via video communication.

“We exchanged 200 of our heroes with Medvedchuk, who had already given all his instructions in the investigation. “Five heroic commanders of Azovstal were exchanged for 55 Russian prisoners who are of no importance to us,” Yermak explained the exchange scheme.

Zelensky listed all the people he knew in Ukraine by name, including the famous photographer from Azovstal, Dmitry Kazatsky (“Orest”).

The commanders who led the defense of Azovstal – Denis Prokopenko (“Redis”), Svyatoslav Palamar (“Kalina”), Sergey Volinsky (“Volina”), Denis Shlega and Oleg Khomenko – will remain in Turkey until the end of the war. According to Volodymyr Zelenskyi, they will be “personally under the protection of Turkish President Recep Tayyip Erdoğan in full security and comfortable conditions.” The reasons for this decision were not disclosed; In his evening video message, Zelensky noted that he had to fight “long and hard” for these people. During the conversation with Zelensky, they all said a few words and thanked those who contributed to their release, as well as those who continue to fight for Ukraine.

Among those released, several people were sentenced to death in the “DPR”. These are the Ukrainians Nikolay Kushch (“Frost”) and Konstantin Nikitenko (“Fox”), Russian publications accused them of killing prisoners and civilians in Mariupol. Also, British Sean Pinner and Aiden Eslin, who fought for Ukraine, and Moroccan Ibrahim Saadun were also sentenced to death in the “DRC” on the charges of “attempting to seize power or forcefully occupying power” and “recruitment”.

Pinner, Eslin, Saadun and seven other foreigners – most likely Britons John Harding, Andrew Hill and Dylan Healy, Americans Alexander Drewke and Andy Hyun, Swedish national Matias Gustavsson and Croatian national Vekoslav Prebeg – were released through the mediation of Saudi Arabia and 21 was brought to the royal territory on September. Volodymyr Zelensky said that the release of citizens of the country who came to help Kiev during the war is “a matter of honor for Ukraine.”

The government of Ukraine has been promising the release of the defenders of Azovstal since the day they were captured – and in Russia they were threatened with trial at the tribunal. The Ministry of Foreign Affairs of the Russian Federation said that the captured Ukrainian soldiers can be released only after the trial against them. The speaker of the State Duma, Vyacheslav Volodin, said that he supports the “ban on the exchange of Nazi criminals” and said that Russia can exchange only “severely wounded” fighters from Azov.

It remains unknown how many defenders of Azovstal were captured in May, but it is at least two thousand people, because at that time 2.5 thousand people left the combine, and by that time 350 people had been exchanged.

Dmytro Lubinets, the human rights representative of the Verkhovna Rada of Ukraine, announced on his Telegram channel the photo of the returned Russian servicemen as part of the exchange, and wrote: “In fact, these are freed Russian servicemen – young “boys” of the second army of the world, who, due to the success of a special operation, arrest those fleeing mobilization at the border. and pensioners.

How was this process covered in Russia?

The Ministry of Defense of the Russian Federation reported that only in the afternoon of September 22, “at the end of the complex negotiation process”, 55 servicemen returned from captivity. The statement only stated that they were “at risk of death” in captivity and that they would be provided with the necessary medical and psychological assistance.

Despite the news from Ukraine the day before, Russian state publications did not mention the exchange of prisoners. “TASS”, RIA Novosti and “Interfax” did not report on this either based on Russian military correspondents or Ukrainian sources.

The exchange of prisoners by Russia was reported only in unofficial sources; “Rybar” channel “Heroes, welcome home!” published a photo of the group returning from captivity taken at the Chkalovsky airfield near Moscow. Some channels wrote that 87 Russian soldiers were returned.

Even on Thursday morning, Russian officials and major TV channels did not dwell on the exchange of prisoners. Only “Kommersant” and “Izvestia” published small reports.

Pro-Kremlin commentators have mixed reactions to Moscow’s surprise move on the prisoner exchange, with major propagandists urging the Russians to applaud the return.

“The morning has come, the sun has risen, and now 87 of our soldiers are sleeping! It is the first time in half a year. No one is pushing them today. They do not cut anyone’s place. None of them will be shot. They are just sleeping. “Today there is no need for someone’s mother to kneel down in the synagogue and pray for her son,” TV presenter Vladimir Solovyov said in a message posted on the Telegram channel.

A few hours ago, Margarita Simonyan, who hinted at the possibility of Russia using nuclear weapons, said that for her, “the joy of saving one’s own people” is more important than the “satisfaction of influencing the enemy”.

“I have said several times that to get our guys out of hell, we need to replace anyone. So it happened. 87 soldiers and officers, 87 of our heroes. We spit on his image. However, such losses could have been prevented with certain approaches,” RT editor-in-chief Margarita Simonyan said in the accompanying post.

Both opponents and supporters of the exchange objected to what they learned about the process from Western and Ukrainian sources, not from Russian officials.

Readers commenting on such posts created a huge wave of protest. Most of the commentators expressed their displeasure at the fact that the Ukrainian politician Medvedchuk was given the Azov fighters, whom the Russian government considers to be Nazis, and called it a betrayal.

The fact that this exchange coincided with the announcement of “partial mobilization” in Russia also increased the anger.

Part of the Russian “patriot” bloggers and media persons could not digest the surrender of the “Azov” commander. VGTRK correspondent Andrey Rudenko asked the first: “Will someone explain????” wrote, and then said that he felt cheated.

Azov fighters who defended Azovstal for two months were captured in the second half of May. The members of the State Duma said that they should be tried, and in August, the Supreme Court of Russia declared the regiment a “terrorist organization”. Denis Pushilin, head of “DPR” said that the trial will be held in Mariupol. In addition, separatists lifted the moratorium on the death penalty in July.

In April, Zelensky offered to exchange Medvedchuk, who was accused of treason in Ukraine, for prisoners. But people in the Kremlin say that Medvedchuk is a citizen of Ukraine and is not considered a soldier, saying that this cannot be discussed. “We have already said that Medvedchuk is a citizen of Ukraine, that he has no connection with Russia and that he is not a soldier. As for the persons captured in “Azovstal”, we are talking about members of the military and nationalist organizations. It is impossible to talk about some kind of exchange, as they are persons of different categories,” said Dmitry Peskov at that time.

Russian propagandists, including Vladimir Solovev, said that “Azov” fighters could not be given in exchange for Medvedchuk. “What will come out of this?” Committing crimes, raping, killing, engaging in terror for eight years […], now let’s exchange them for some Medvedchukka?! To a citizen of Ukraine? There are 400 of our guys in captivity! No, guys, if we play with this painful topic now, the people will not forgive us for it!” – he said in his author’s program in May.

Later, the head of “DPR” Denis Pushilin confirmed that he participated in the exchange process and Viktor Medvedchuk was “released”. He said that he signed the decree on the exchange because “the lives of the young men are above all else”, stressing that everyone “understands their feelings”.

“In my eyes, more than a thousand of our young men were released with the participation of Viktor Medvedchuk within the framework of the Minsk processes and beyond, they could not have survived in those conditions,” said Pushilin about Medvedchuk.