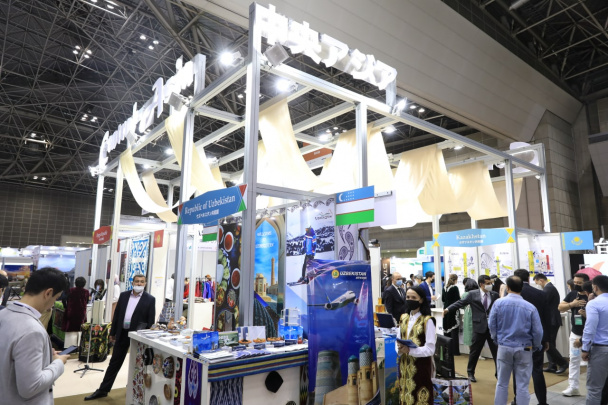 Speaking at the opening of the stand, Deputy Prime Minister Aziz Abduhakimov noted that Uzbekistan and Japan have great potential in tourism, said that Uzbekistan offers many benefits to entrepreneurs in this field, and called for active cooperation with the tourism business in Japan.

Photo: Press service of the Ministry of Tourism and Cultural Heritage

On June 22, the exhibition “Tourism Expo Japan” began at the International Exhibition Center in Tokyo. This is one of the largest conferences in the world tourism industry, and previous years’ exhibitions have attracted about 200,000 visitors in just a few days.

Kun.uz correspondent reports that Central Asian countries are participating in the conference at a single stand, in accordance with the principle of “One type – the whole region” proposed by the President of Uzbekistan, Shavkat Mirziyoyev.

Deputy Prime Minister of Uzbekistan, Minister of Tourism and Cultural Heritage Aziz Abduhakimov participated in the opening of the stand. In his speech, he noted that tourism was defined as one of the strategic areas of the national economy by President Shavkat Mirziyoyev; urged the Japanese working in the tourism business to work more actively with Uzbekistan partners.

“As a result of the reforms in the field, the visa regime was simplified, an electronic visa was introduced, and a number of benefits were granted to representatives of the tourism business. New tourist facilities are being built in all regions.

Uzbekistan and Japan have great potential in the field of tourism. The history of Japanese travel to Uzbekistan goes back centuries: trade-economic, cultural-humanitarian relations of this country developed through the Great Silk Road. Abduhakimov said.

Uzbek tour operators are also participating in the exhibition, holding B2B meetings with their colleagues from Japan and other countries.

Drug dealer with 4.2 kilograms of marijuana detained in Talas