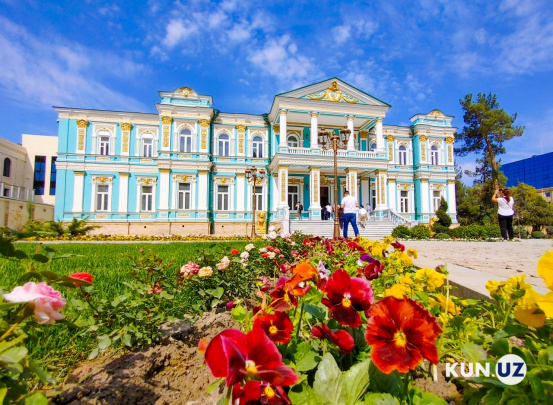 As part of the SCO summit held in Samarkand, the exhibition “The Great Silk Road: Golden Heritage of Uzbekistan and China” and the museum “Friendship of Peoples and Religious Tolerance” were opened. Kun.uz reporters present a photo report from these cultural objects.

The history of the building, which houses the museum exposition on the historical relations between Uzbekistan and China, is very interesting. Built in 1899 on Abramov Avenue in Samarkand, this building was a branch of the Bank of Russia – China. The white building, a novelty for Samarkand, was built in a style based on European classical architecture.

The entrance to the building is decorated with statues of two lion-like “Fu” dogs, the Chinese symbol of protection.

The bank was liquidated at the end of 1909 and merged with another bank. After the Bolshevik coup, he also ends his career. The building, which has performed various social functions since the time of the USSR, was transferred to the Samarkand State University in 2000.

Currently, in accordance with the government’s decision, an exhibition for visitors has been organized in this building as part of the SCO Summit in Samarkand.

The museum exposition focuses on socio-economic relations between the ancient cities of Uzbekistan and China, the original homeland of silk.

The beginning of the exposition is called “Welcome Hall”, and upon entering the hall, you can witness the wisdom of the Chinese philosopher Confucius and the Uzbek thinker poet Alisher Navoi.

Alisher Navoi: “A man of war is not a man, there is no one who is sad because of the sorrow of the people.”

There are also Uzbek pottery products created under the influence of Chinese porcelain in different historical periods.

The central exposition of the exhibition consists of the mulberry tree, a symbol of fertility and wealth in China. Here you can get acquainted with the legend of the origin of silk and the history of the cocoon.

Another important part of the exposition is a display based on the image of a Chinese princess on a boat going to Samarkand. This composition dates back to the 7th century and depicts a Chinese princess sailing in a boat accompanied by servants and guards.

This scene is a copy of a fragment of Afrosyab wall painting.

Another museum established in the city of Samarkand, the museum “Friendship of Peoples and Religious Tolerance” shows the valuable virtues of the multi-ethnic people.

The symbol of the Order of “Friendship” is placed in the center of the exposition. The museum also has attributes reflecting the activities of national-cultural centers in Uzbekistan and the values ​​of different nations.

The museum also has a statue dedicated to the family of Shoahmad Shomahmudov, a blacksmith from Tashkent, who adopted 14 children of different nationalities during the war.